skip to main | skip to sidebar

'I'm going home.'
'— a sharp lad with a bit of experience of the world could – what?'
'I said I'm going home,' repeated Twoflower.
'What home?' said Rincewind, astonished.
'Home home. My home. Where I live,' Twoflower explained sheepishly. 'Back across the sea. You know. Where I came from.'
'Oh.'
There was a pause. Then Twoflower said, 'You see, last night it occurred to me, I thought, well, the thing is, all this travelling and seeing things is fine but there's also a lot of fun to be had from having been. You know, sticking all your pictures in a book and remembering things.'
'There is?'
'Oh, yes. The important thing about having lots of things to remember is that you've got to go somewhere afterwards where you can remember them, you see? You've got to stop. You haven't really been anywhere until you've got back home. I think that's what I mean.'
Rincewind ran the sentence across his mind again. It didn't seem any better second time around.
'Oh,' he said again. Well, good. If that's the way you look at it.'

-from 'The Light Fantastic' by Terry Pratchett.

I'm shipping up to Cologne

There is a short story by Ruskin Bond whose details I have largely forgotten. But essentially it is about an Englishman who meets an elderly Indian and they soon start chatting about England. They soon start talking about the natural beauty of the country and of how the people from different parts each have their own different perspectives. The Indian seems to know a lot about the country, often more than the Englishman; however at the end it is revealed that the Indian has never stepped foot outside his own country and all his knowledge was from reading countless books about England.

The story resonated with me at some level. Since a young age, I was fascinated with all the different countries in the world. I knew the capitals of all of the countries in the world and spent hours poring over the big globe in my house, trying to learn as much as I could about the world. Even today, I love watching travel shows; the endless variety of cultures, geographies and the people themselves still fascinates me. Yet, I had never actually been to any of these places. I was like the elderly Indian from Ruskin Bond's story, a plethora of arm chair knowledge, but without any personal experiences.

So now is a good time to set the record straight. For those who do not know, I will be spending the next academic term as an exchange student at the University of Cologne. For me, the exchange programme was one of the key attractions of an MBA from an IIM, ever since I first heard about the programme from Abhishek Nagaraj. And now the dream has become a reality. If all goes according to plan, I would have visited around 15 countries by the end of the year, spending more than three months studying European culture, history, geography and hopefully a bit of management studies as well.

Today, I finally start my Europe trip. It promises to be an amazing journey, and I plan to make the most of it. And I plan to post about my journeys on a regular basis, as well upload a few pictures. And for today, I will begin the trip with a bit of travel advice from Douglas Adams. It seems quite fitting to pay tribute to him, afterall the idea of the Hitchhiker's series came to him while back packing through Europe. So like a good traveller, I shall remember where my towel is, and also remember the two words written in large friendly letters on the cover of a remarkable book. 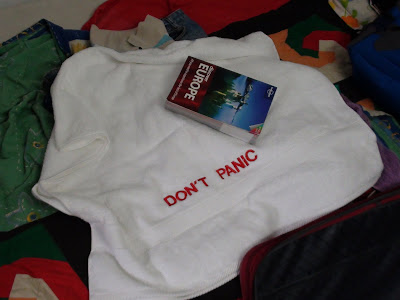 I had first blogged about Mal Loye back in 2007, when Sehwag was prolific but probably not a contender for 'great' as he was averaging below 50 at that time. For some reason I expected Loye (and Uthappa to a smaller extent) to do what Sehwag did. However, both of them failed where Sehwag succeeded, and in Loye's case, more's the pity.

Loye made his first class debut way back in 1991, when Atherton was yet to become captain and England were probably at their lowest ebb ever. However, Loye was continually overlooked for a spot in the team, although he came close on more than one occasion. This was before Jayasuriya, or even Greatbatch had popularised the top order slog. So Loye was probably a victim of England's preference for the dull over the spectacular. Another example could be that of Ali Brown, an equally aggressive cricketer, who although made his debut in 1996, deserved to play more than 16 ODIs (and no tests, just like Loye).

Maybe Loye was ahead of his time, maybe England made a big mistake by not seeing his potential. Or maybe he just didn't prove himself at the highest level. In any case, looking at the recent warm u game India is playing against the Northants, it is good to see that Loye has already reached 84*, while Sehwag scored just 8. Maybe that can be of some respite to a good cricketer, who unfortunately never got the chance that he deserved.

I truly became a Cricket nut back in 1996, with the World Cup being held for the second time in the Indian subcontinent. And like most kids my age, I cheered for Sachin through both of his centuries, went wild with glee after India's victory over Pakistan and almost cried along with Vinod Kambli in the semis. However around the same time, I also picked up a liking for an Australian leg spinner who soon became my cricketing hero. The man in question, was obviously Shane Warne.

Like all childhood heros, its hard to quantify what exactly it was that attracted me towards Warne. Maybe it was his bowling style - he just seemed to casually walk to the crease and effortllessly send down balls which even the finest of batsmen would find hard to handle. Or maybe it was his on field demeanour - he was always full of energy and couldn't be kept out of the game for long. It could even be his looks, or his success, but for some reason, I was well and truly hooked. Warne was my hero. I started bowling leg spin and even imitated his action. I tried to read about him as much as possible. I even had his poster in my room; no Sachin, no Azhar, only Warne. Years later, my family shifted to a new house and I had to leave the poster behind. That was probably one of my life's biggest tragedies.

In 1996, I was a smart little kid who knew all his Cricket statistics and freely shared my Cricketing knowledge with whoever I could find. Today, I might have grown up and forgotten some of the stats, but I still talk a lot about Cricket. In '96, Warne was a prodigious turner of the ball, was amazingly accurate and had a sharp Cricketing brain which was the biggest reason for his success. Today, he might have lost a lot of his turn and some of his accuracy, but he still is one of the best thinkers in the game and this is what makes him him truly great. Nobody expected Warne to be such a major force after his surgery, not many thought of him as good captaincy material and nobody expected his team to succeed in the first IPL. And yet he did. That's what made him special - he was a conjurer. He did not bother with the mundane, he only dealt with the special.

Which is why when I first heard about his retirement, I knew that I had to be there. I had never seem him play, and the thought of not watching my hero play even once was simply unbearable. So I went to the Royals' last game against Mumbai. The Royals were already out of the tournament, they were, to use a cliche, playing for pride. But all that did not matter to me, I was there just to see him play. And I was not disappointed. My eyes were always on him, right from the moment he stepped out for warm up. I saw him bowl, and I saw him take a wicket. I saw him on the field, always busy, talking to his bowlers and fielders all the time. And I saw him celebrating a victory with his team, for one last time.

I stayed back till the end since I wanted to listen to him speak. I tried to get as close to the post match ceremony as possible. But as it turned out, the audio coverage was for TV viewers only, so I never could find out what he said in his last post match speech. Yet, I stayed back, hoping that he would probably take a farewell lap. But that was not to happen. Soon after the ceremony, he started walking across the ground, away from where I was, and towards the opposite end. And as I saw him slowly walk away, it finally started to sink in. I would never see him on a Cricket ground again. All those hours spent happily watching him play tricks on the opposition batsmen, they had come to an end. This was it. I started to walk out of the ground, trying to come to terms with a Warne-less world. And by the time I turned around catch a final glimpse of him, he was already gone.

To borrow from Sir Arthur C Clarke, I stand now at the turning point between two eras. Behind me is a past to which I can never return. The childhood of my Cricketing life has come to an end. Goodbye Warnie, the last of my childhood heroes, you will be sorely missed.

I just spent the last two hours going over the whole IIPM - JAM mag saga that erupted five years ago. Although I had read quite a bit about it earlier, there was much that I had missed. And this where it all started - the original article in JAM. 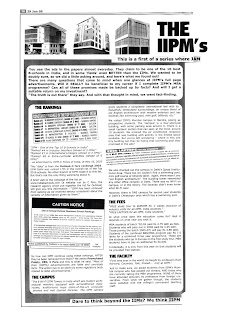 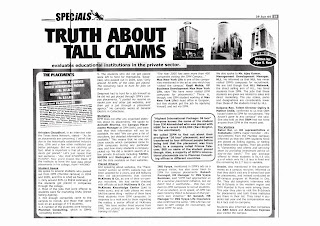 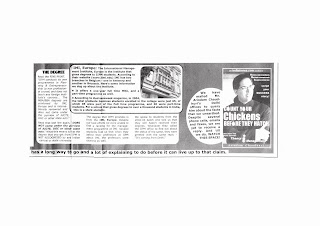 This is my first article for Cricket Diaries. Hopefully, there shall be more to come.

As the title suggests, this one is regarding the Ashes.
posted at 9:07 PM No comments:

The FIA recently announced that the Indian GP will be a part of the 2011 Formula-1 season. This is great news not just for all motorsport fans in India, but also for all Formula-1 fans in the world.

That is because a new feature that will be unique to the Indian GP will be launched at the race by the FIA: the race will have 'mamas' (traffic cops) standing at various locations on the track. They will randomly stop cars and then ask the drivers for their licenses, PUCs, insurance papers and NOCs for the cars (as the cars are not registered at the local RTO). The driver who can pay them off quickest and reach the finishing line first will win the race.

The FIA believes that this new feature will help attract more viewers to the sport, which is already suffering from various problems like reduced viewership numbers and the presence of drivers like Lewis Hamilton. Also, the FIA is hoping that "One day F1 too will have IPL following" and has hence decided to appoint Lalit Modi as the 'Traffic Commissioner' for the Indian GP.